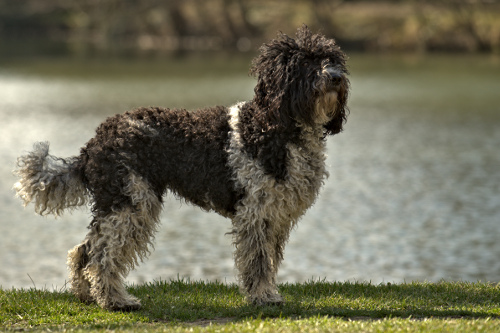 born 13th February 2015
at the kennel Novaforesta
in Ringwood (GB)

Pepsi's pedigree in the Barbet database

Pepsi is a very open and lively dog, who loves people. She is a terrible flirt and manages to wrap everyone around her fingers or rather paws. Pepsi visited puppy school and obedience courses at the local dog school KOSSP and has successfully passed the A0 exam, which is a necessary requirement to start at dog sport competitions. We are currently training FCI Obedience with the Hovawart Club Hovawartfreunde Schleswig-Holstein Mitte.

At the age of nine months she has already presented herself well at dog shows. She holds the title of Croatian and Slovenian Junior Champion and Croatian Beauty Champion.

Pepsi has also had the chance to gain some experience as a companion dog at the German International School of Zagreb. A couple of times she was taken to visit primary school as well as a dog club.

Meanwhile Novaforesta Lily-of-the-Valley has fully grown. In 2016 she passed the hunting aptitude test of the VBBFL in Germany which consisted of two parts, one in spring and the other in autumn. She passed the test with 144 points.