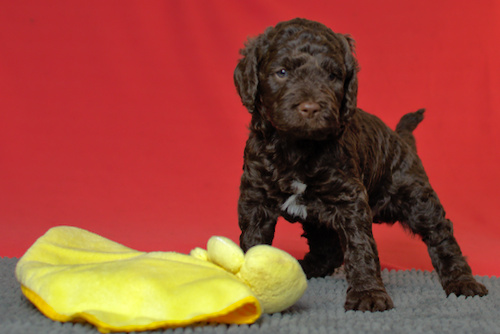 Han Solo, a brown male, lives in Rhuddlan (Wales) now and is called Bruin. Bruin stayed with us until he was 15 weeks and we still miss him a little. When Bruin was at our place, he was always very charming and managed to get a lot of cuddles from visitors. He did not have any problem adapting to his new life in Wales because the circumstances that expected him were similar to ours (except for the weather). Bruin is the third dog in the family. He lives with another female Barbet called Olive and a senior american bulldog called Cooper.

On our summer holidays we had the opportunity to meet him again and it was really lovely to see that his owners had alread established a good relationship with him. We were really happy to see that. Bruin's owner trains him to become a search and rescue dog which is fantastic. It does not only include a lot of obedience training but he also needs to be calm with the sheep that hide behind every shrub in Wales. We admire their hard work and wish them all the best for their efforts.

Bruin has grown a lot and almost looks like an adult dog now. We get videos of him and his training progress on a regular basis and we are always very impressed by it.

The Life of Bruin