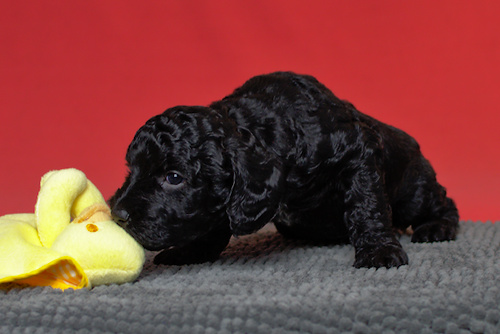 Princess Leia, the black female with the white breast, lives in a family in Fürstenfeldbruck (Germany) now and is called Amy. The family owns another Barbet, Jacko da Capo, who is three and a half years older than Amy. Jacko's interesting life can be followed on this website.

Jacko has already successfully passed a gundog working test and accompanies his owner regularly on the hunt. However, as Jacko's family also uses him in many other areas, such as mantrailing and dog shows, it was time for a second Barbet. Amy was the right choice, because already as a puppy she has shown extreme pleasure in retrieving objects. She was also very interested in a duckwing that we had presented and was one of the puppies who retrieved it out of the puppy swimming pool. That may sound simple, but considering that the puppies had got to know the water just a few days before, it was quite a big achievement to climb into the pool and get out with the large duck wing in her fang.

Meanwhile Amy has developed into a pretty lady and provides Jacko with a lot of exercise as she continuously asks him to play with her. Amy's owner trains her as a gun dog and Amy further shows great potential. We are very excited about her development.

The Life of Amy